In 2015, the scarecrow of the migration crisis was circumventing European society, resulting in the spread of a migration panic. People on the run reminded Europeans of a possible collapse of the social order and security. When we conceive of an event as a crisis, we can expect specific interventions of nation-states, which see themselves as guarantors of security – that is why border walls lined with razor wires, emblematic images of infrastructural violence. At the same time, the growing power of these borders was more a sign of the power of nation-states weakened by neoliberalism and globalization.

European countries have used various mechanisms to manage the migration crisis, from declaring emergencies to militarizing borders and forming archipelagos of hotspots, detention centers and refugee camps, especially on Mediterranean islands. The location of refugees and migrants in these heteropic areas of exclusion is intended to guarantee the European population a state of security. The accentuation of migration as a security threat therefore also produces a specific type of social space acting as a repository for the surplus population, as a place of control over the bare lives of migration actors.

The backbone of research activity is research focused on actors and entities against which nation states and international institutions apply the mechanisms of biopolitical and securitization policies. Its aim is to analyze this problem and subsequently disseminate the findings to the general public. Behind this activity is the question of whether and to what extent the idea of ​​Europe and European identity is based on the biopolitical principle of filtering and excluding those who are identified as undesirable. 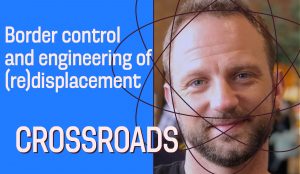